Painting with dots of colour has a longer history in art than is commonly realised, the artists of pre-history pressed their pigments into the surfaces at Lascaux with points of skin at the end of sticks. 19th century 'pointillisme' as developed by Seurat was based on the colour theories of Michel Eugene Chevreul and Charles Henry, but the appeal of those 'divisionist' theories of the way that colour is perceived by the human eye has long since waned. However, the appeal of the 'pointe', a mark devoid of the calligraphic character inherent in so much European painting from the 16th c. onwards, has retained some appeal.

A case could be made for suggesting that artists as various as Bridget Riley, Chuck Close or James Hugonin owe elements of their practise to the impersonal marks championed by Seurat. But unlike these artists, William Wilkins' use of pointillism is put to the purposes of close observation and the principle of the unknowability, in the final analysis, of 'the other'. His interests include the dissolution of forms in light and the degree to which a shadow can be penetrated by the eye.

While Seurat painted the most exquisite small scale works he also created monumental 'grands machines' to rival those of his academic contemporaries. Wilkins has no such pretensions 'there is quite enough monumental work already being created'. His work aspires to concentration, density, and the vibrant uncertainty of human interaction with the environment.

The following photographs show paintings at different stages. The first, at an early stage, shows how the painting develops, no drawing, no lines of any kind, just notes of colour, tone and luminosity on the pure white ground. The second shows a painting at a more advanced stage where they are starting to cluster. 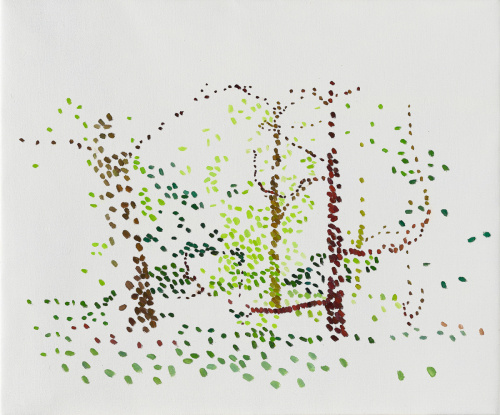 Painting at an early stage. 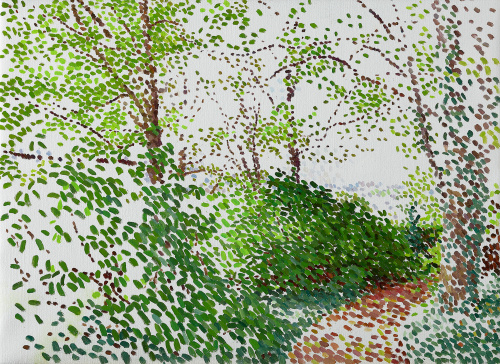 Painting at a more advanced stage.